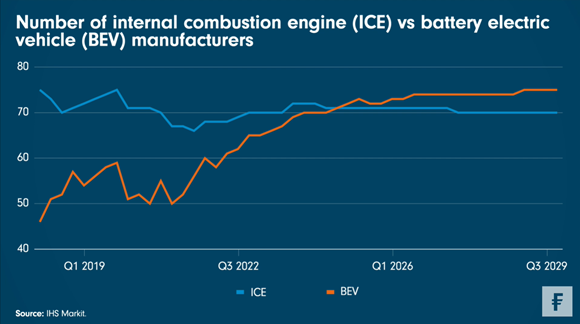 With carmakers charged for growth, manufacturers of battery electric vehicles (BEVs) should outnumber internal combustion engine (ICE) carmakers by the middle of this decade, according to forecasts from IHS Markit. And if you strip out the small manufacturers (less than 5,000 cars a year for BEVs and 20,000 for ICE), that crossover point could come as early as this year.

It’s an understatement to say 2021 was a good year for Tesla, which is now bigger by market value than its nearest five or more rivals combined. But 2021 was also a year in which investors demonstrated increased confidence in EV specialists more broadly. And whatever you may think about the market capitalisation of Tesla, Rivian or Nio, these are now well-funded companies building significant production capacity and real products. This ramp up should serve to take further market share from sales of traditional ICE cars.

Small wonder, then, that incumbent ICE carmakers have redoubled their EV efforts, with corporate ‘EV Days’ an almost ubiquitous feature of the last 12 months. These events, at which manufacturers showcase their new BEV technology and upcoming products, are one way that the traditional auto industry is responding to both the competitive threat posed by newer manufacturers and the regulatory necessity of moving away from ICEs. For example, to be carbon neutral by 2050, including the lifespan of their products, automakers will need to sell their last ICE vehicles around 2040. Faced with semiconductor shortages, carmakers have opted to allocate chips to EVs over ICE vehicles, particularly in Europe, to ensure regulatory compliance.

Indeed, the rising penetration of EVs in Europe comes as little surprise, given the healthy level of subsidies available and the need to comply with emissions regulations. More surprising has been China’s rapid electrification, with penetration currently around 18 per cent of the market. The extension of subsidies to the end of 2022 has been a major boost. So too is a quota system that specifies (via various formulae) a minimum ratio of so-called ‘new energy vehicle’ production to ICE production.

The US, meanwhile, could be on the cusp of a significant expansion of EV subsidies and infrastructure spending. While President Joe Biden’s $1.75 trillion ‘Build Back Better’ bill, which includes EV tax credits and funding for charging stations, faces uncertainty in Congress, manufacturers are nonetheless improving their EV offerings in the US market, with BEVs even starting to enter the market for pickup trucks. Up to now, the US has lagged China and Europe on BEV product availability, so these improvements should support further EV penetration.