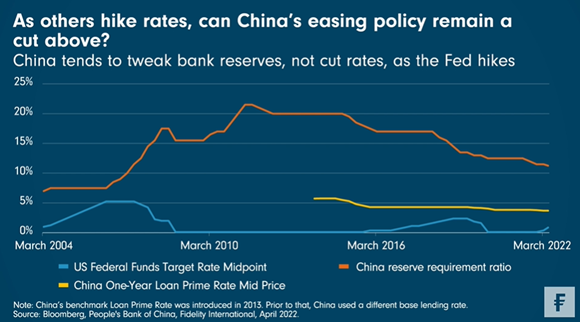 Chart Room: As others hike rates, can China’s easing policy remain a cut above?

Cuts to the reserve requirement ratio, or RRR, remain China’s monetary policy weapon of choice. How they are wielded highlights the delicate tightrope policymakers must walk.

In the US, where inflation is raging, all eyes are on the Federal Reserve’s next moves on rate hikes. In China, where the economy has been floundering under different pressures, the market is anticipating rate cuts – but not by the same measures that investors might look for elsewhere.

The broad market expectations are that the People’s Bank of China will continue cutting bank cash reserve requirements, supported by central bank relending to support specific sectors. After holding the reserve requirement ratio steady for most of 2020, the PBOC has cut the rate three times since last September.

Meanwhile, policies aimed at helping the slowing economy are coming into focus. Since March, regulators have been encouraging mergers and acquisition loans for developers to purchase distressed real estate assets. Separately, the government is moving to make it easier for domestic companies to list offshore, including in Hong Kong. It’s setting aside a fund reserved for handling systemic financial risks. And the global supply shocks and geopolitical uncertainties from the Ukraine conflict appear to be moderating.

Using the RRR underlines the delicate edge that the government must walk in dealing with the disparate challenges that beset the Chinese economy. The central bank has to encourage lending without sparking the kind of freewheeling, broad-based spending that has so often in the past overheated the Chinese economy and ignited concerns over excess leverage. Maintaining economic stability remains key.

A more fundamental dilemma: weak credit demand, rather than constrained money supply, is at the heart of this slowdown. Further weakening the PBOC’s hand, we expect the second half of the year to bring higher pork prices – a key component of consumer inflation – which may constrain the central bank’s ability to cut rates. Neither are policymakers likely to cut much when the Fed is on a hiking campaign. Our review of official data shows that the PBOC rarely cuts lending rates while the Fed is on a hawkish trajectory.

The implications are that the central bank likely recognises that excessive monetary easing might not be the right tool here – instead, priming demand likely requires other policies such as relaxing property market controls and balancing monetary policy with larger fiscal measures. Fiscal measures could include a handful of other supplementary tools such as so-called relending to boost sectors such as agriculture or small enterprises. Revisiting Covid containment policy could occur but, that said, we do not expect a large change of direction.

Another risk is that, after a relatively strong start to the year for the Chinese currency, the continued divergence of China-US monetary policies could add pressure on the renminbi to weaken. The Chinese central bank has been cutting its forex reserve ratio to stabilise its currency. Further downward pressure on the renminbi could reignite fears over the sort of capital flight last seen circa 2015 – though we are not there yet.

In summary, China’s weaker macro readings in recent months suggest that the government’s 5.5 per cent economic growth target will likely be difficult to reach this year. But there are signs the worst may be behind us and the economy might be turning a corner. We think financing conditions are becoming slightly more favourable. We will probably see more easing from here, as China’s policy seeks to remain a cut above – or ahead of – the rest.