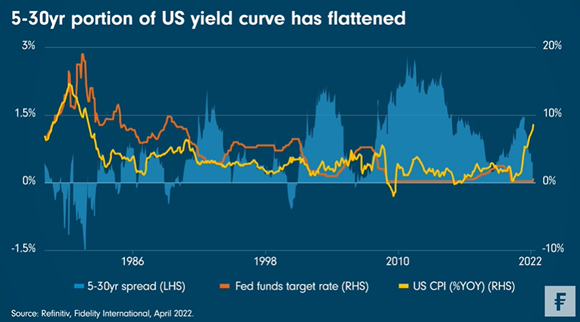 Chart Room: US yield curve could steepen further out

Not only are we sceptical of the economic scenarios implied by the current pricing of the medium and long parts of the US yield curve respectively, but we believe they are even less likely to play out in combination. As a result, we expect the 5-30yr portion of the curve will steepen.

The US yield curve has flattened dramatically this year and parts of it have even inverted. An inverted 2-10yr yield curve is often watched as a predictor of a recession since it indicates that interest rates are close to peaking and will be lowered again as the economy slows. The 5-30yr part of the yield curve is less talked about, but it is still revealing. It reflects the market outlook for both the medium-term path of interest rates and also for longer dated bonds that are driven by structural factors, which go far beyond the scope of the current cycle.

As this week’s Chart Room shows, the 5-30 segment of the US curve is currently flat. We believe it’s unlikely to stay that way for long.

Yields on the five year are being driven higher by the Fed’s need to tighten policy amid historically high inflation. At the same time, signs are already emerging that surging inflation is weakening growth. If slowing growth starts to dominate the market narrative, the current path of interest rates implied by markets could look too aggressive, leading 5-year yields to stabilise, if not fall, as a result.

Meanwhile, the long end of the curve is indicating that once the hiking cycle is over, inflation will come under control and we will return to the disinflationary pattern that prevailed in the 2010s. However, a number of structural changes, including de-globalisation and greenflation, are likely to keep inflation elevated in the future.

Taken together, we think the combination of narratives priced by the 5-year and 30-year is unlikely to materialise. It implies that runaway inflation is a big enough danger that a record pace of tightening is necessary to rein it in with little chance of a Fed U-turn even if a recession comes. Yet at the same time, the current curve also assumes that in the long term this inflationary episode will be followed by a period of serene long-term price stability as forecast by the Fed.

In other words, the transitory inflation narrative is alive and well in the 5-30 curve. We see this as a contradiction that is likely to be resolved by the 5-30 steepening.